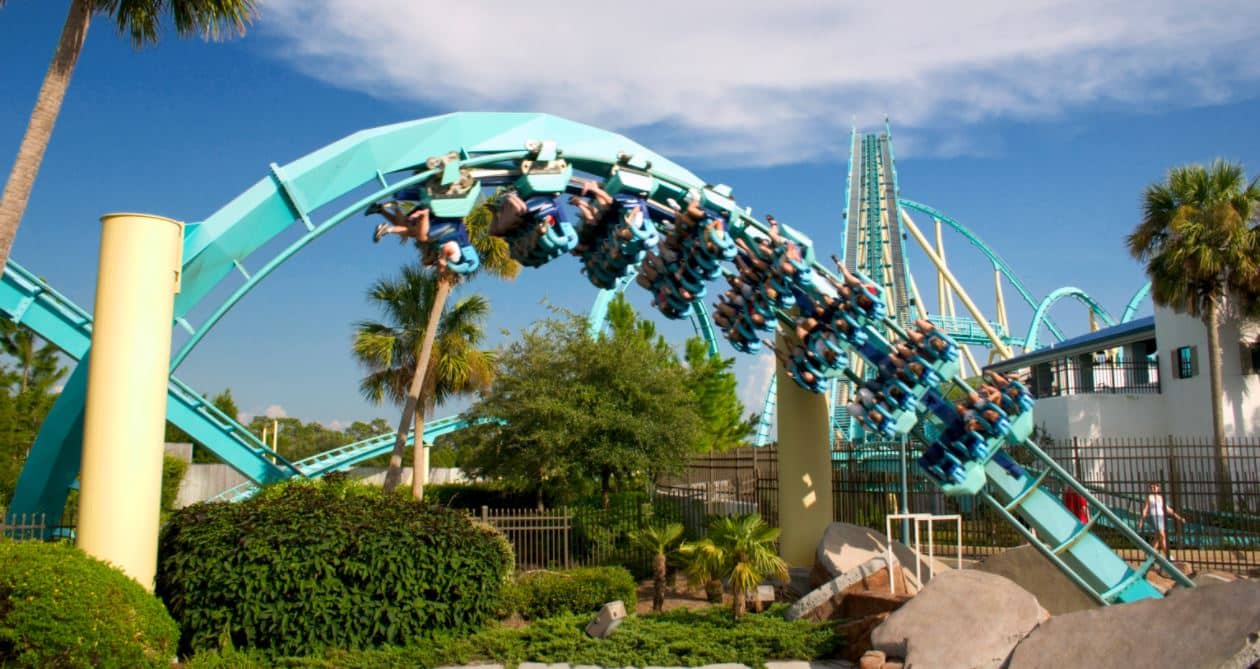 Welcome to Orlando Lanes and our today’s pick for the blog is about fastest rides at the Universal Orlando Resort. The Universal Resort in Orlando, Florida is home to two world-class theme parks; Universal Studios Florida and Islands of Adventure. They allow, you to step foot into the movies, immersing yourself into the world of so many well-known characters.

The parks have no shortage of thrills and offer a great variety of rides and experiences for the entire family, from more mild experiences to the ultimate thrills for the daredevil. In the list of rides there are a lots of rides that simulate motion and trick the mind into thinking.

You’re moving a lot quicker than you actually are through the use of special ride vehicles and 3d screens but don’t worry, there’s definitely high-speed thrills at the parks that move pretty fast, so in order of speed today we’re going to be counting down the top 10 fastest rides at the Universal Orlando Resort.

Since, the removal of dragon challenge in September of 2017 it’s brought the total number of fast moving rides at the parks to nine, so instead of starting this list off with storm force of Celestron which only reaches a maximum speed of 10 miles per hour and would be lame if we include it in our list of top 10 fastest rides in Universal Orlando Resort.

Harry Potter and the Forbidden Journey at Islands

Harry Potter and The Forbidden Journey at Islands of Adventure uses a very unique and one-of-a-kind ride system that takes you on a magical thrilling journey. Again, this is another great ride that utilizes physical set-pieces animatronics.

Lastly their Skull Island reign of Kong are also islands of adventure. This ride has you boarding one of the largest trackless ride vehicles found in a theme park and immerses you through 3d screens in a very unique way. It’s also worth experiencing just for the impressive King Kong animatronic alone. This figure is massive and very detailed you will not be disappointed. 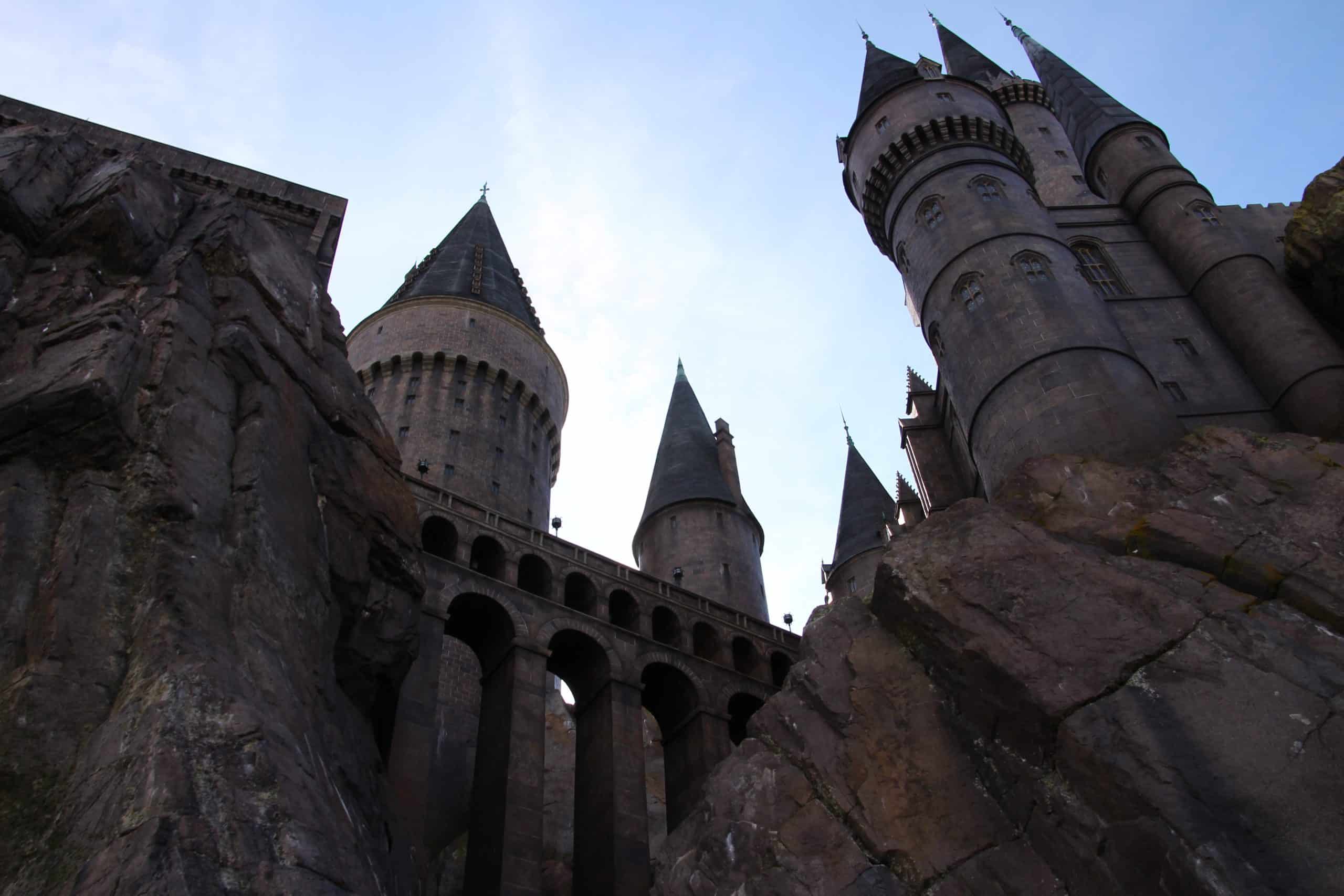 It’s a Vekoma junior coaster, so the track layout is quite short coming in with a wry time of only 44 seconds and it reaches a top speed of 20 1.7 miles per hour. It’s definitely not the fastest, but it goes through many winding turns and is a good mild thrill to get you warmed up for the other coasters at the parks. 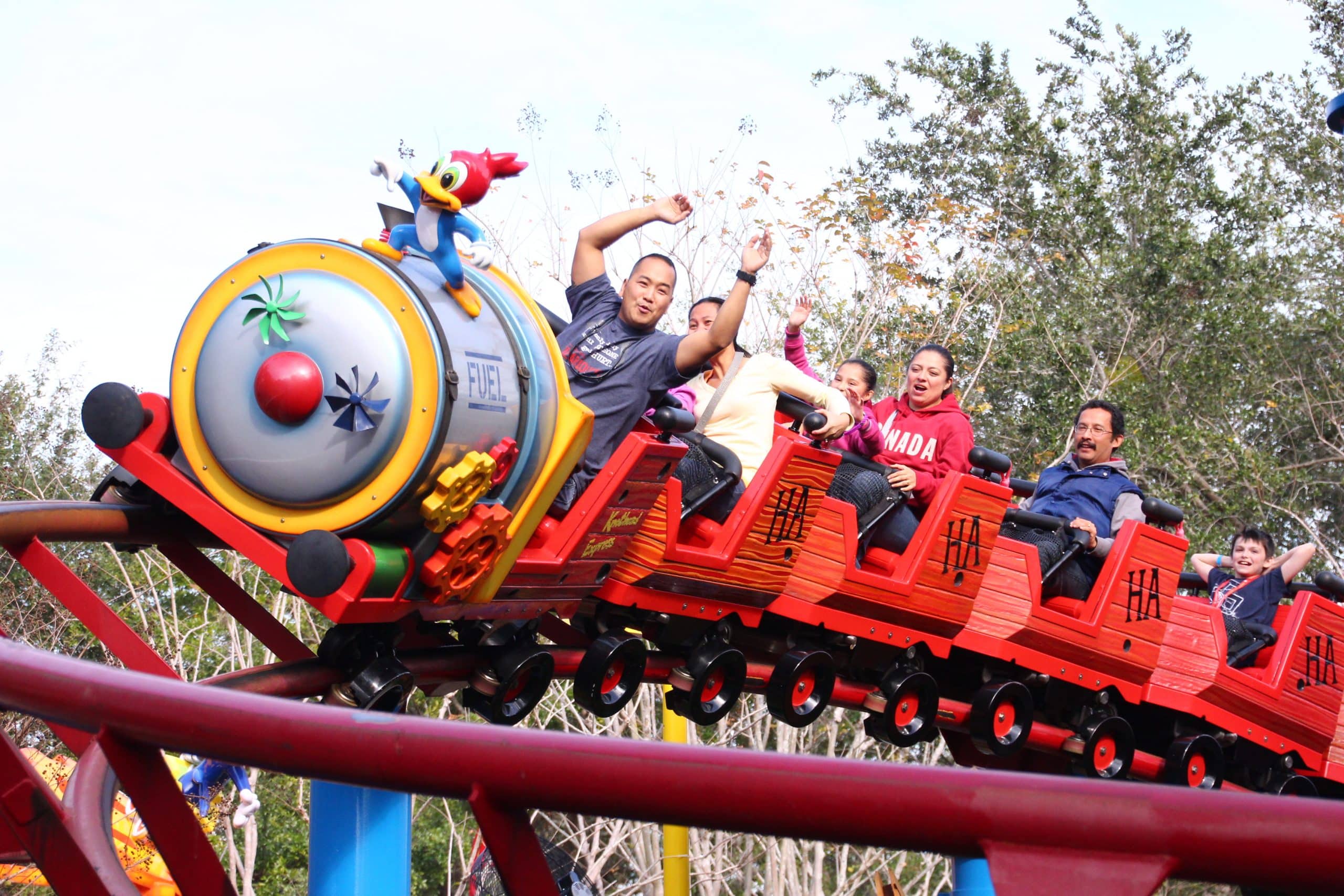 Next Harry Potter and the Escape from Gringotts staying at Universal Studios Florida will head into the Wizarding World of Harry Potter Diagon Alley. As soon as you enter this impressive land you’re greeted by the fire-breathing Ukrainian iron belly dragon on top of the Gringotts Bank, which houses the escape from Gringotts attraction. It opened with the land on July 8th 2014 and is a roller coaster 3D dark ride hybrid.

The rise described as being a family coaster but it’s pretty tame. Now, Universal has remained fairly quiet on how fast this ride actually travels but after the first show seen on the ride end your cart tilts about 40 degrees and you head down a 30-foot drop. So, coaster specialists have said it probably reaches speeds between 20 to 30 miles per hour, but after the initial drop it’s then a slow paced journey for the rest of the ride. If you generally don’t like coasters and are worried, it might be too much.

Many non-coaster fans have loved it and it’s honestly not intense at all. Also one of the best parts of the ride is the queue. The Marvel Lobby is extremely detailed not to mention the goblin animatronics that will definitely keep you occupied.

While you wait, this ride does have a single rider line which can help cut wait times but be prepared to store your bags in a free locker to the right of the entrance before entering the queue. The ride is a pretty fair length coming in at five minutes and overall, it’s a smooth immersive journey through the Wizarding World of Harry Potter. 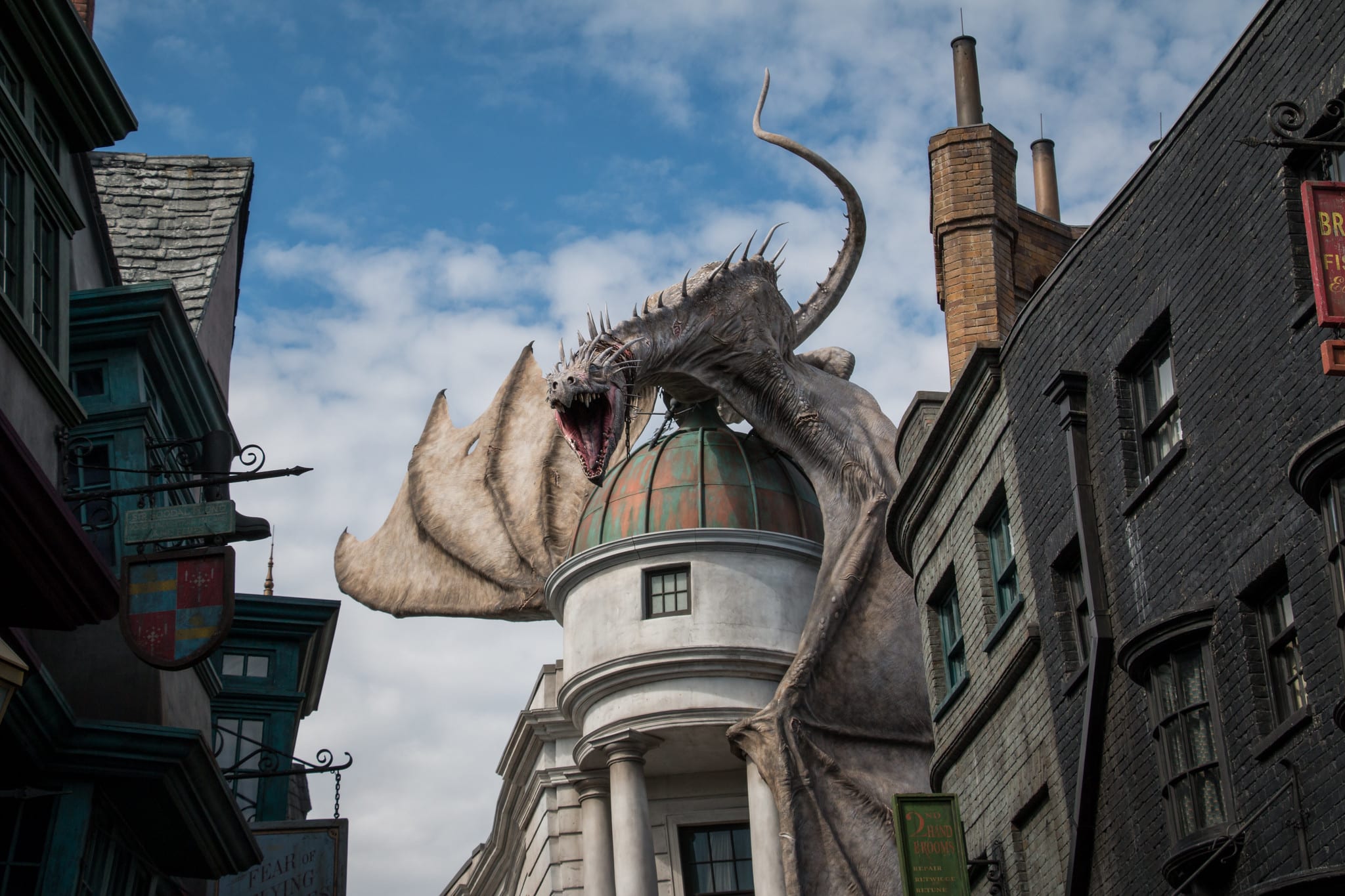 Flight at the Hippogriff

During Flight at the Hippogriff next we’ll travel across two islands of adventure wherein the Wizarding World of Harry Potter Hogsmeade you’ll find the roller coaster flight of the Hippogriff. The ride originally opened on June 29 2000.

As the flying unicorn, once the Wizarding World opened on June 18 2010 it was then redeemed to fit Harry Potter. The ride was manufactured by bakoma and is considered to also be a junior coaster. But for a junior coaster it’s pretty thrilling as it reaches speeds of up to 28 point five miles per hour. As you step into your ride vehicle you’ll find yourself on a test flight of a Hippogriff.

While you fly over the Forbidden Forest and Hagrid’s height the ride is a sizable drop includes many twists and turns with the entire experience lasting one minute and six seconds. Now don’t let the size of this coaster trick you because even though it’s small it provides a decent thrill which is worth experiencing if the weight isn’t too long. 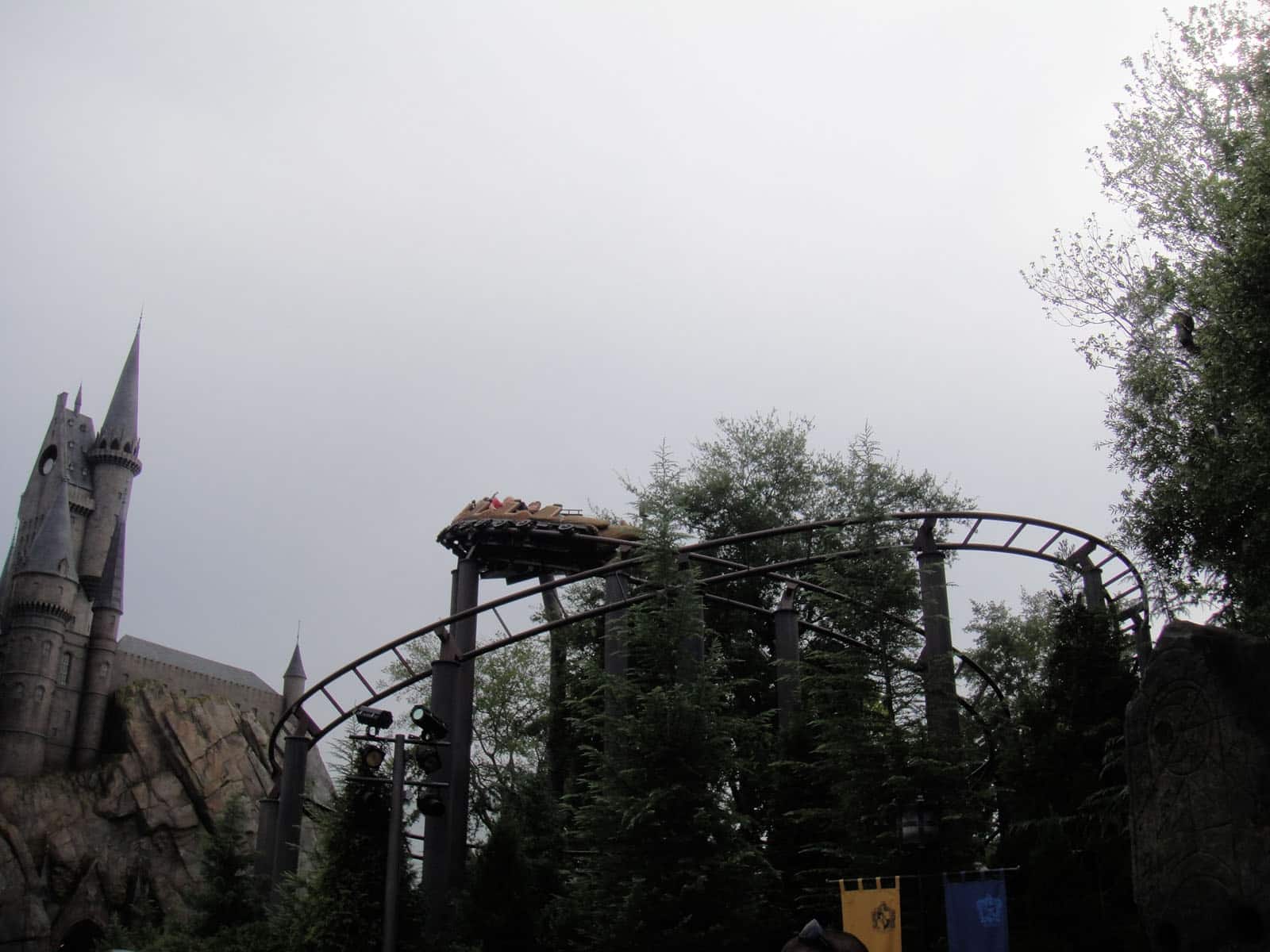 At the Dr. Doom Spear Fall stay at islands of adventure we’ll head into Marvel superhero Island where you can find the drop tower ride; dr. Doom’s fear fall. It opened on May 28th 1999 and it’s hard to miss the two 200-foot towers peeking out of the parks skyline as you board your ride vehicle.

The doom bot does a countdown then you’re launched a hundred and eighty-five feet in the air within seconds reaching a speed of 40 miles per hour. Both towers offer the exact same experience but the ride does look a lot more intimidating than it actually is you definitely feel the g-force but after that initial launch you just bounce up and down at small intervals.

As you slowly make your descent back to the loading platform the ride itself is quite short coming in at about 30 seconds, but if you enjoy all free attractions and the weight is just right definitely check out Dr. Doom’s Fear Fall. 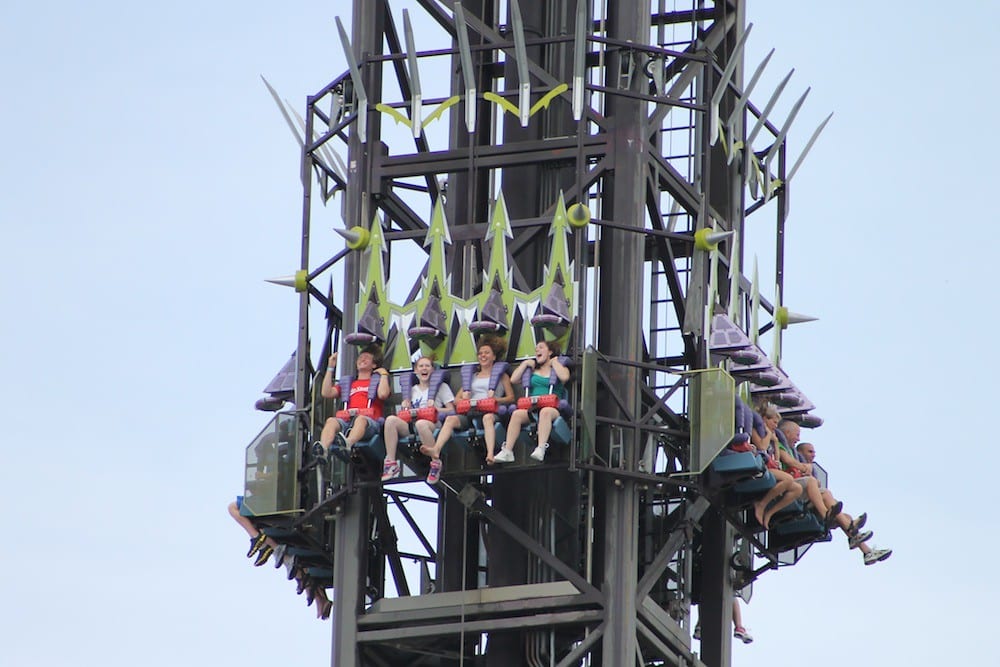 Image Credits Inside the Magic

At the Dudley Do-Right Rip off Falls heading up the path to toon lagoon at Islands of Adventure, we’ll find the first water ride. On the list Dudley do-right strips off Falls opened with the park on May 28th 1999 and is based off the Dudley do-right cartoons. The ride takes you through this wacky cartoon world of mostly outdoor show scenes that tease you with water and prepare you for the big drop.

Now, when we say big we mean big. Get ready to descend 75 feet reaching speeds of 45 miles per hour in a matter of seconds. You’re pretty much on a roller coaster because when the log heads down the flume you’re actually traveling on a roller coaster track until it sends you back into the water at the very bottom.

It’s almost impossible to stay dry on this ride so be prepared to get wet. Dudley do-right strips off Falls has a right time of 5 minutes and 30 seconds making it one of the longer rides on the list and is a perfect way to cool down on a hot day at the park. 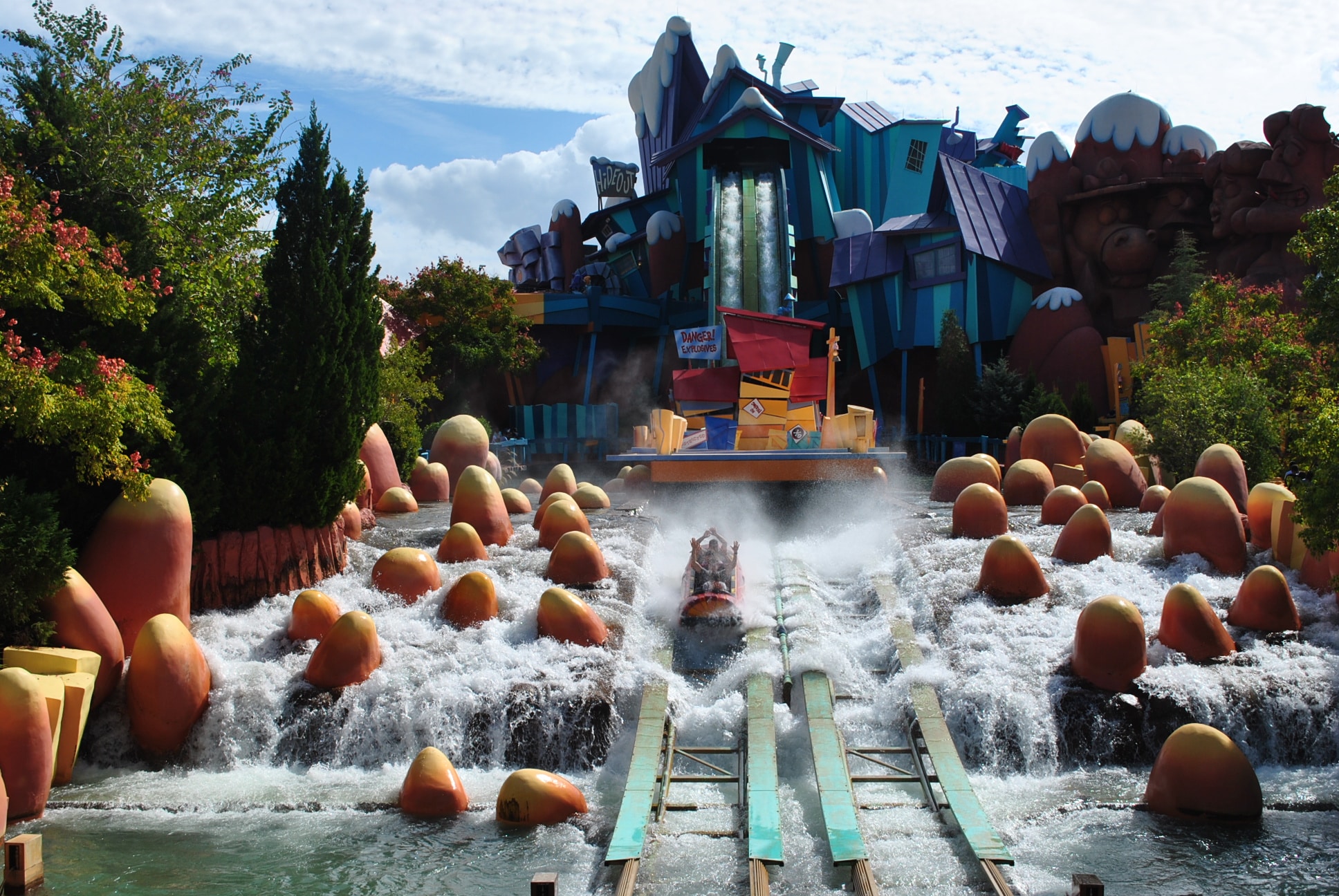 Revenge of the Mummy

Now at Revenge of the Mummy traveling back to Universal Studios Florida, in the New York section of the park you’ll find the ride revenge of the mummy. It opened on May 21st 2004 and is an enclosed steel roller coaster and dark ride hybrid, that’s sure to give you a sizable dose of thrill. The façade is the Museum of Antiquities but as you enter you realize you’re stepping onto the set of a new mummy sequel.

As you board your mine carts the ride starts off as a pretty tame dark ride but the second half is where the experience takes a turn. You’re then launched into the main coaster section that reaches speeds of up to 45 miles per hour. It’s a thrilling ride through the dark that includes a lot of smoke effects and you’ll have no idea which way you’ll be turning next.

This ride also has a single rider line which can help cut down on the wait time but once again be prepared to store your bag and loose articles in a free Locker before you enter the ride. Revenge of the mummy is probably one of the best thrill rides at Universal and you’ll definitely want to over and over again. 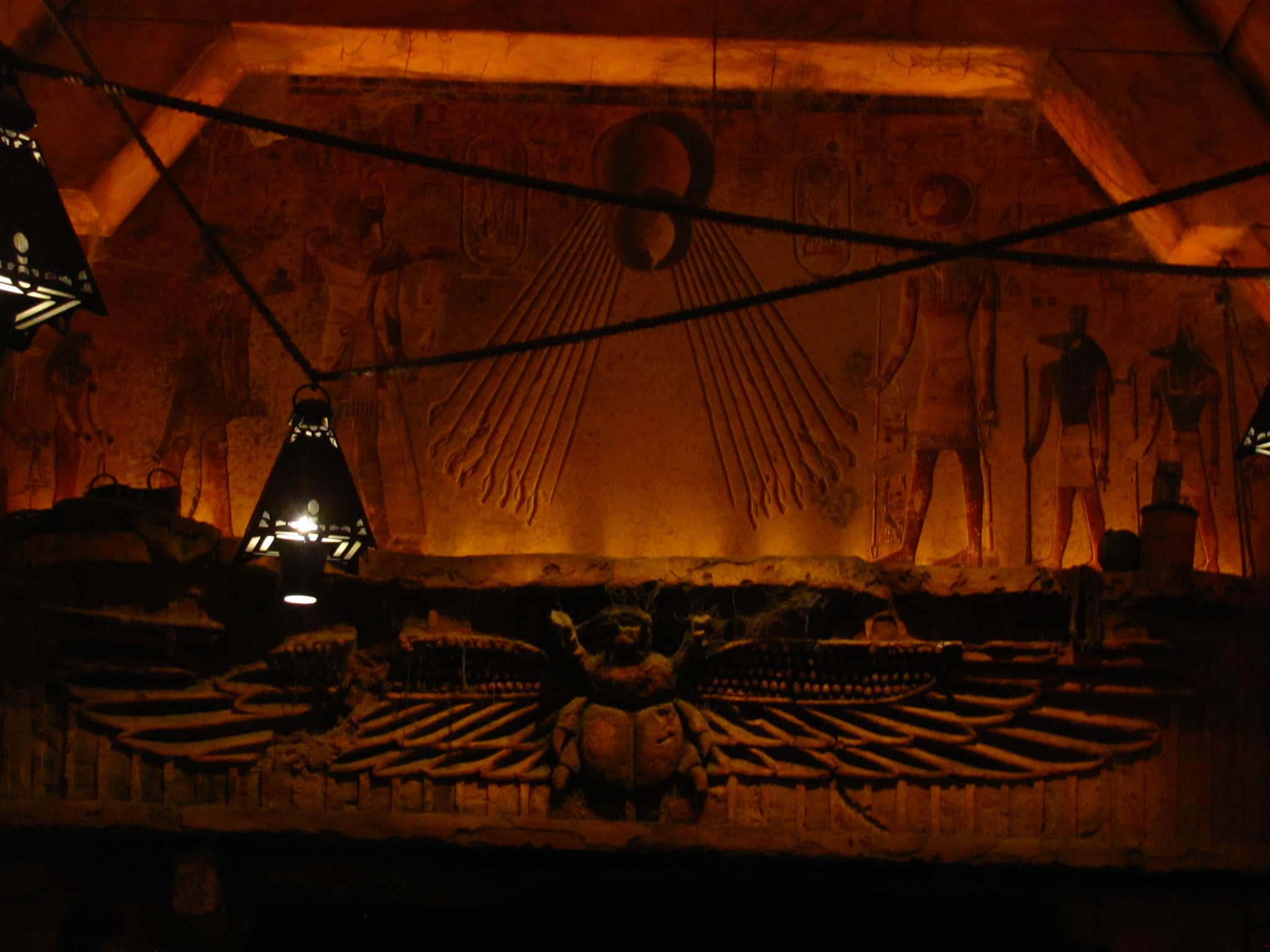 As you board your raft you’ll embark on a water cruise exploring the iconic world of Jurassic Park. The gate opens and suddenly, you’re faced with lush landscaping and animatronic dinosaurs everywhere. After you head up the lift hill into the indoor show building there’s only one way out and you’ll soon find yourself heading down an 85 foot drop at a 60 degree angle reaching speeds of up to 50 miles per hour.

At the time when it was built the drop was the tallest found on a water ride in any theme park. Now do prepare to get wet but you probably won’t get drenched on this one Jurassic Park River adventure that comes in with the longest ride on the list at 6 minutes and 30 seconds and it wouldn’t be a trip to islands of adventure without paying a visit to Jurassic Park. 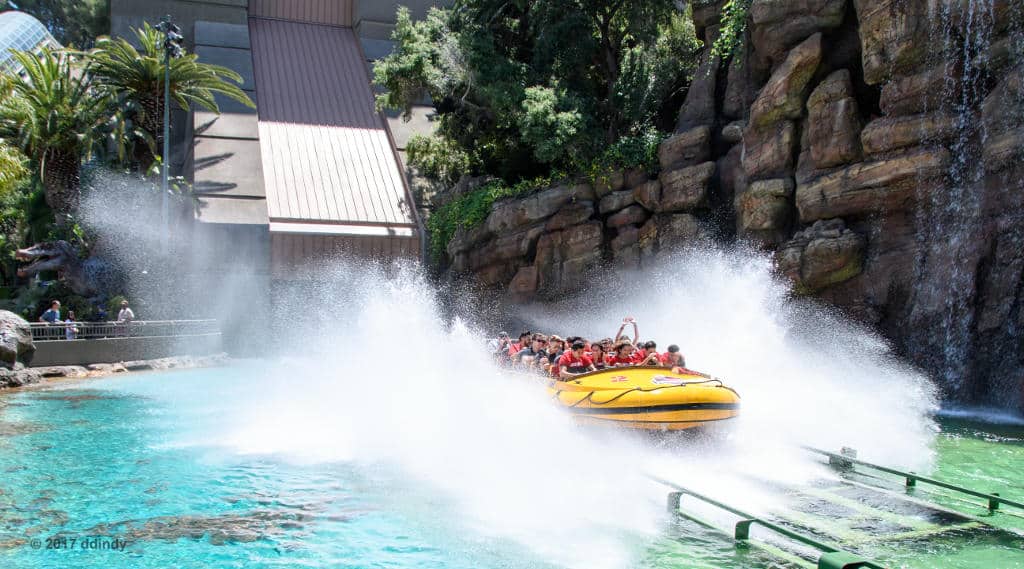 Your ride vehicle then makes its way through the non-inverting loop even though you never actually go upside down. On this ride you’ll find yourself twisting and turning through the rest of the track with a few smaller drops. On the way, it’s a smooth ride and definitely a lot of fun. Now before entering the queue you will pass through a metal detector.

So, everything you’re carrying with you needs to be checked into a free Locker before riding Hollywood Rip Ride Rockit. It does have a single rider line that could help cut down on the wait time and with a ride time of 1 minute and 45 seconds, nothing short of a thrilling experience the entire way through. 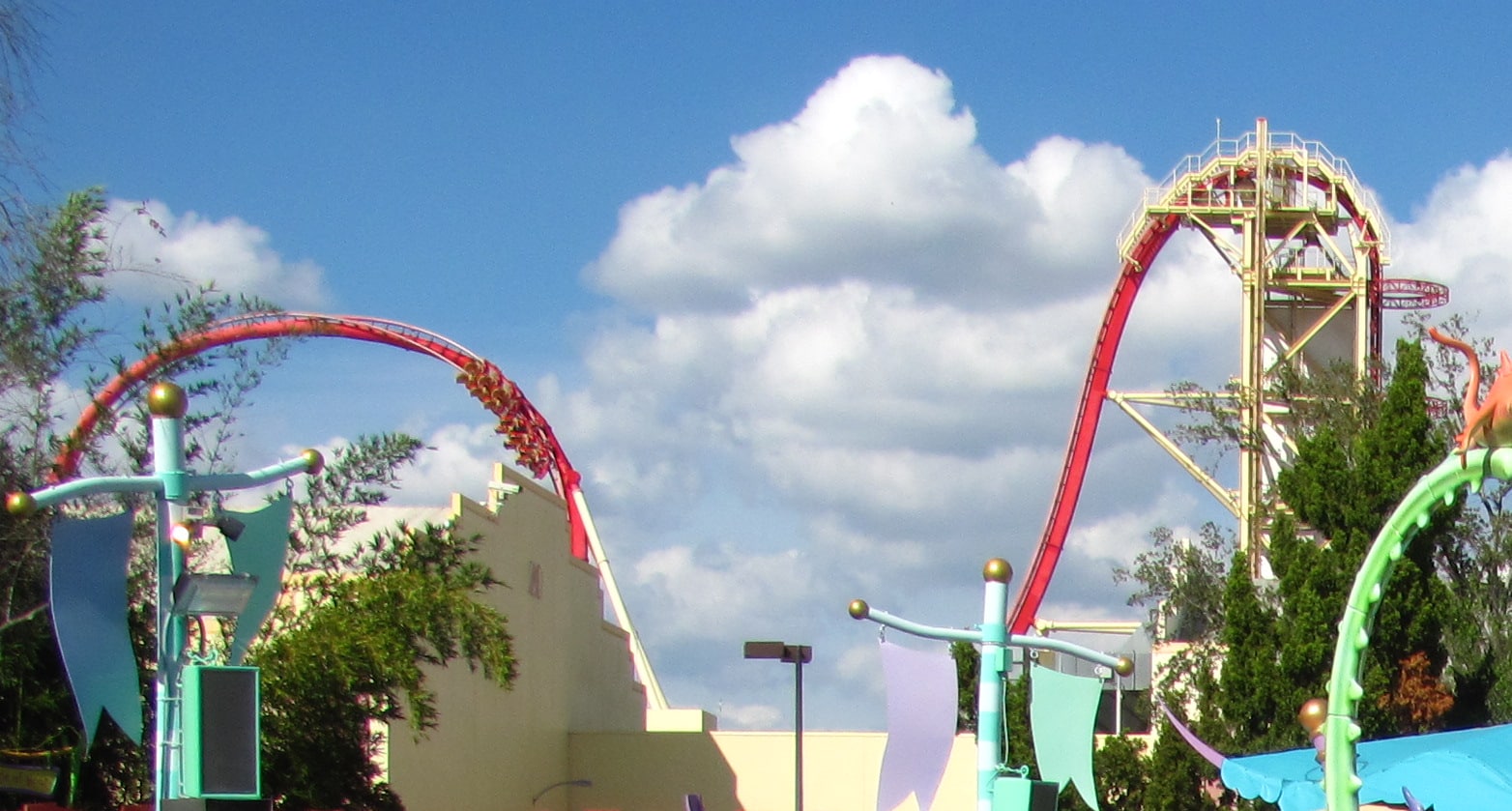 At The Incredible Hulk Coaster heading back into Marvel Superhero Island at Islands of Adventure we’ll find the fastest ride at the Universal Orlando Resort. The Incredible Hulk coaster opened with the park on May 28th 1999 and is a bam sitting coaster.

As you head through the lift Hill tunnel get ready to be launched and then you’ll reach a speed of 40 miles per hour in just two seconds then find yourself reaching a top speed of 67 miles per hour. This coaster takes you for a spin and has seven inversions including a zero-g roll a Cobra roll two vertical loops and two corkscrews. If you’re looking for the ultimate thrill at Universal you need to ride this coaster.

Now, like Hollywood Rip Ride Rockit, before entering the cube you will pass through metal detectors and anything you’re carrying with you including everything in your pockets needs to be checked into a free Locker before riding. The Incredible Hulk does offer a single rider line but it doesn’t really cut down wait times too much.

So, be prepared to wait for this one with a right time of 1 minute and 15 seconds. The adrenaline will pump right through you and you’ll definitely want to ride this one again. 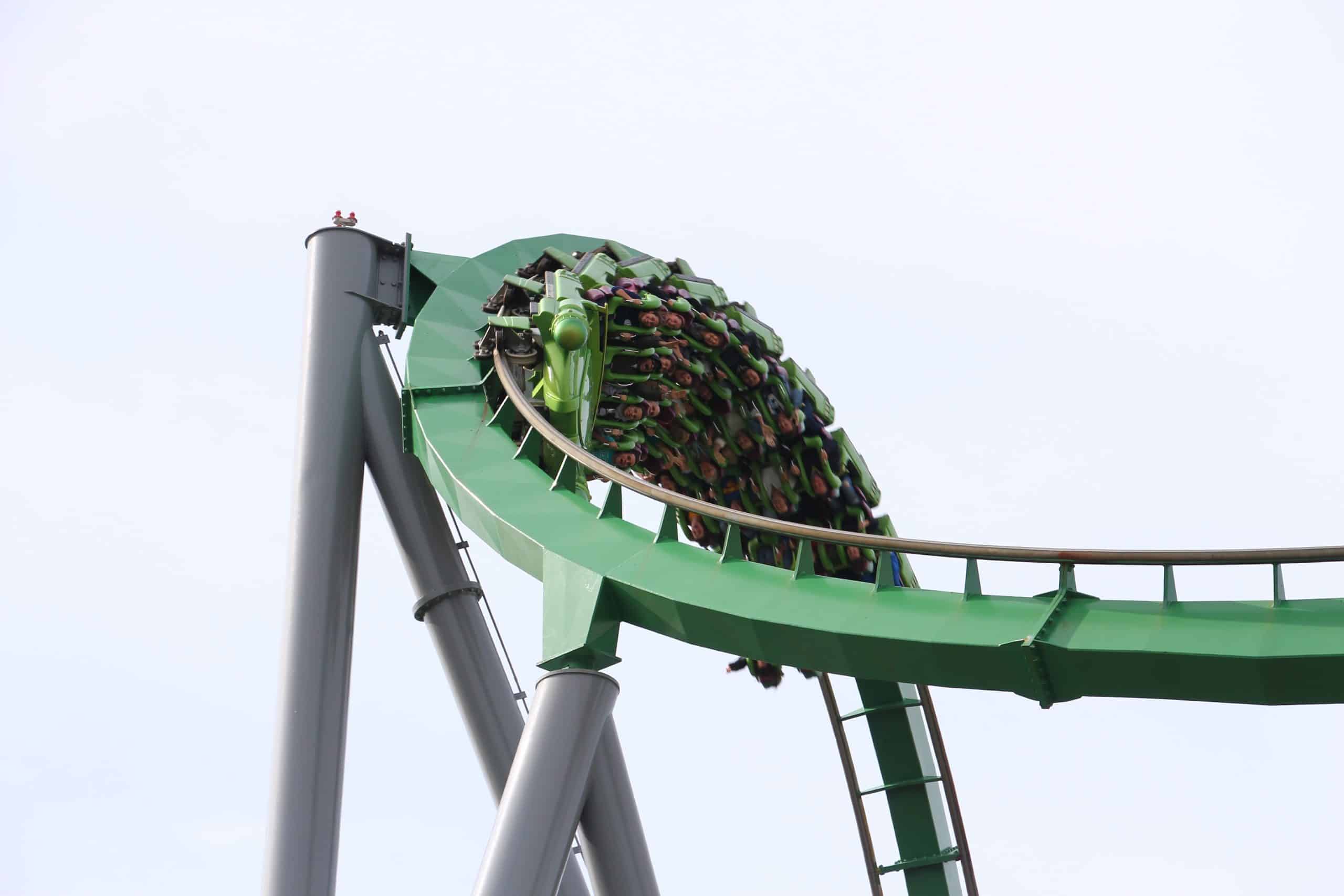 That’s all we have for now about 10 fastest rides in Universal Orlando Resort. If you ever tried any of these rides after reading our blog, do let us know about your experience in comments section. Don’t forget to subscribe our website for more interesting stuff related to Universal, Disney and Orlando travel guide. Don’t forget to share our blog post with your friends and family on your social profiles.