When you elect a bunch of clowns, you end up with a circus | Views + Opinions | Orlando 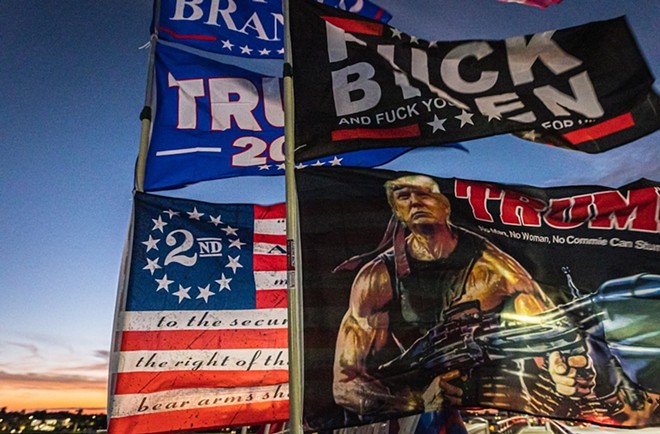 Donald Trump’s third presidential campaign launched like a fart in an elevator not because Republican elites awoke from their seven-year stupor to reject his racist grievances, conspiracy theories and authoritarian appeals; they turned on him because he bore a stench of defeat so thick that even Trump couldn’t pretend it didn’t exist.

Ever so slightly, Trump’s hold on the party had loosened. Maybe not permanently. Republicans denounced the Department of Justice’s appointment of a special counsel to investigate Trump, and the martyrdom of an actual indictment might do wonders to elevate his status in MAGAland. But Trump’s petulant, gaslighting response — falsely asserting that other former presidents had absconded with records, then saying he “won’t partake” in the investigation, as if it were optional — failed to rally the masses to his banner, not like it used to.

Regardless of who leads it in 2024, however, the GOP is still the party that Trump molded in his image — high on its own supply, locked in a Fox News feedback loop. Consider that immediately after an election in which voters rebuked the GOP’s social extremism, three-fourths of Senate Republicans voted against same-sex marriage.

More to the point, though, consider what House Republicans did as soon as they secured their slim majority: They promised to investigate Hunter Biden (and his laptop, and the social media companies that didn’t boost stories about his laptop before the 2020 election). To investigate the FBI for investigating Donald Trump. To investigate the DOJ for charging participants in the Jan. 6 insurrection. To investigate Anthony Fauci for trying to deal with the pandemic. To investigate the FBI director for using a taxpayer-funded plane to get on vacation, which Rep. Elise Stefanik believes is “illegal and unethical”; in fact, since 2011, executive branch policy has required FBI directors to use government airplanes for all flights, including personal trips. To cut off aid to Ukraine. To gut funding for the IRS. To play Russian roulette with the debt ceiling. To impeach the secretary of Homeland Security.

They haven’t said so yet, but I’d wager a not-small sum they’ll pass a national abortion ban and find an excuse to impeach Joe Biden before the next election, too. The party’s political minds will warn them that these are terrible ideas that have no chance of going anywhere. But when you elect clowns, you get a circus, and poor Kevin McCarthy will be in no position to keep them in line. He’ll be the weakest House speaker in modern history — assuming he becomes speaker, which isn’t a foregone conclusion — his testicles in a vice owned by the Freedom Caucus.

To be clear, it’s Congress’ job to investigate malfeasance and abuses of power. But that’s not what House Republicans have planned. They want two years of Benghazis — dubious hearings that, despite their limited merits, provide fodder for Tucker Carlson while Republicans fish for something substantive enough to damage the Biden administration, à la Hillary’s emails. (Never mind that these same Republicans saw and heard no evil when the Trump administration was throwing the Constitution in a blender.)

Look no further than the news conference given last Thursday by the Reps. James Comer and Jim Jordan, the incoming chairmen of the House Oversight and Judiciary Committees, respectively.

“Committee Republicans have uncovered evidence of federal crimes committed by, and to the benefit of, members of the president’s family,” asserted Comer, an election-denying Trump sycophant. “These include conspiracy or defrauding the United States, wire fraud, conspiracy to commit wire fraud, violation of the Foreign Agents Registration Act, violations of the Foreign Corrupt Practices Act, violations of the Trafficking Victims Protections Act, tax evasion, money laundering, and conspiracy to commit money laundering. The Biden family’s business dealings implicate a wide range of criminality from human trafficking to potential violations of the Constitution.”

The 31-page report the Republicans produced didn’t cite any of the aforementioned crimes. Instead, it lobbed accusations of “self-dealing” and “corruption” while vaguely referencing unnamed whistleblowers and reports of suspicious banking activity — one of which “implies Hunter Biden has some connection to a sex trafficking operation.” (To translate: He might have paid a prostitute.) They claim that Joe Biden, while he wasn’t in public office, was a partner in one of Hunter’s dealings with an oil company in China — again, not a crime, though, if true, unseemly.

Let’s see what else the Biden Mafia is up to: “From Valerie Biden Owens, the President’s ‘sister, confidante, and longtime political strategist,’ penning a book about the Biden family shortly after the inauguration to Francis ‘Frank’ Biden ‘promot[ing] his relationship to the commander-in-chief in an Inauguration Day advertisement for the law firm he advises[,]’ the Biden family’s monetization of the President’s time in Washington is well documented.”

Maybe don’t bring out the guillotine yet.

It’s clear Hunter will be the villain of the next two years: his business ventures in Ukraine and China, his affinity for booger sugar, and so on. But congressional Republicans might have to get in line: The same DOJ that’s investigating Trump is also investigating Hunter. A probe of his overseas business dealings has boiled down to scrutiny of his taxes and statements he made about his drug use when he bought a gun. A Trump-appointed prosecutor will ultimately decide whether to charge him.

Only 28% of Americans think Hunter Biden’s finances should be a top priority for the next Congress — not coincidentally, the same percentage wants Congress to put impeaching Biden on the front burner. Some of the GOP’s savvier political minds want to distance themselves from the freak show. But that’s what you get when you align with extremists.

On Thursday, when reporters tried to ask Comer about, well, anything else, he cut them off. “If we could keep it about Hunter Biden, that would be great.”

The man has priorities.