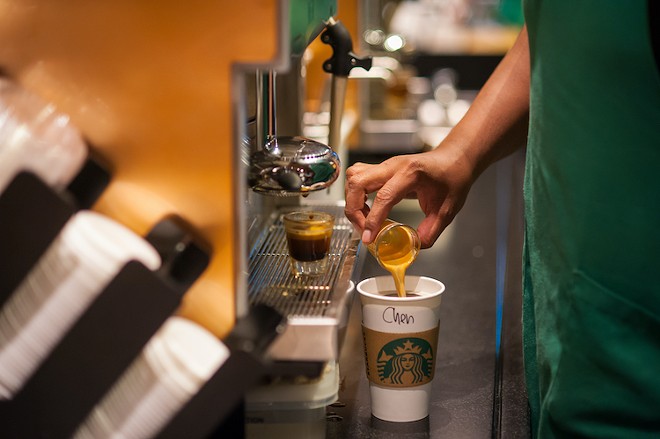 Earlier this month, a Starbucks store in Winter Park became the latest in Florida to file for a union election since a massive Starbucks union drive kicked off across the country last year.

Since last August, more than 270 Starbucks stores in the United States have publicly shared their intent to unionize, including stores in largely non-unionized Southern states like Florida, North Carolina and South Carolina — which has the lowest rate of union membership of any state in the nation.

At the 400 S. Park Ave. Starbucks, barista-trainer and union leader Sean Ebersviller tells Orlando Weekly that a number of factors — including pay, staffing, scheduling and the COVID-19 pandemic — have been driving the unionization effort at their location. The pandemic, Ebersviller says, “has made people’s labor more valuable. And it has also made a lot of people realize how valuable their labor is.”

Ebersviller, who uses they/them pronouns, has worked at Starbucks for about a year. Prior to that, the 23-year-old barista worked several retail jobs and in concessions at a movie theater. They’re currently attending college.

Job benefits offered by Starbucks, like tuition coverage and insurance coverage for transgender healthcare services, are important to them and their co-workers, many of whom are LGBTQ.

As the Washington Post has reported, women, nonbinary workers and queer workers have been a driving force behind the Starbucks Workers United campaign.

Young people like Ebersviller and Leo Hernandez, a Starbucks union leader in Jacksonville, have also been at the forefront.

“My generation is lacking in a feeling of community,” Hernandez told the Washington Post. “It’s a sense of community for us to organize in this way and then to watch all the other stores organize — we’re being connected to each other in a way we haven’t seen before.”

Starbucks has long touted its commitment to inclusion and diversity. Amid a wave of anti-LGBTQ laws sweeping the nation, some workers have said the company’s stated values are part of the coffee chain’s appeal. The company’s health insurance has covered gender reassignment surgery since 2012. And in 2018, Starbucks expanded its healthcare benefits to include coverage for additional gender-affirming services, such as hormone replacement therapy.

But Ebersviller says in order to gain and maintain eligibility for those benefits, employees need to work a minimum 20 hours per week, on average. And meeting that threshold isn’t always guaranteed.

They say the pressure to ensure they meet that minimum hourly requirement can make workers feel as though, rather than providing benefits to workers, Starbucks is “holding people hostage.”

“One of the first things told to me by a co-worker when I got hired was how to sign up for food stamps,” Ebersviller says.Starbucks made record profits last year.

Maddie Doran, a former Starbucks worker in Kansas who was fired during her store’s union drive earlier this year, told the local NPR station that, as a trans person, the thought of losing her health benefits was devastating. “For me, gender-affirming surgeries are lifesaving and if I were to lose access to those, it puts me in an extremely bad place,” said Doran.

According to a Gallup poll from last year, one in six U.S. workers stay in an unwanted job in order to retain their health benefits. Trans adults, in particular, are less likely to have health insurance, compared to their cisgender counterparts, and often face additional barriers to quality comprehensive care.

In March, Starbucks Workers United filed a complaint with the National Labor Relations Board, alleging that Starbucks has been cutting the hours of workers in order to thwart their organizing efforts.

“These hours cuts are in swift response to workplace organizing campaigns at Starbucks stores around the country,” the complaint alleges. The union added, “The reduction of hours has resulted in lost pay; has rendered, or will soon render, employees ineligible for benefits that have hours-worked eligibility requirements, including health care coverage and the Starbucks College Achievement Plan (tuition coverage); and has or will soon result in the constructive discharge of Starbucks employees.”

Under federal labor law, retaliating against workers for organizing — by, for example, cutting hours, disciplining or terminating workers’ employment — is illegal, yet still a common practice utilized by employers during organizing campaigns. Earlier this month, the federal labor board accused Starbucks of more than 200 violations of federal labor law, stemming from claims made by Starbucks Workers United.

Ebersviller, from the Winter Park Starbucks, says they’ve personally had a hard time getting enough hours lately to meet the company’s 20-hour threshold for benefits. While they can’t say for sure whether that’s tied to their involvement in union activity, this nonetheless is a concern.

“Tuition coverage for the university I’m actively attending … has been jeopardized several times by not being scheduled for enough hours,” says Ebersviller. “And I know that’s not a thing that has just happened to me.”

Another big issue that’s been brought up in organizing discussions is pay. According to Ebersviller, baristas at their store make $12.60 an hour on average. “It is most definitely not enough to live on literally anywhere in Orlando,” Ebersviller says. “Not in Winter Park, not in Oviedo, not in a shack, not in rural Seminole County. You can’t live on $12 an hour.”

Even without factoring in recent inflation or Central Florida’s skyrocketing rent prices, a living wage for a childless adult in Orange County is about $18 an hour.

“One of the first things that was told to me by one of my co-workers when I got hired was how to sign up for food stamps,” Ebersviller tells Orlando Weekly.

Starbucks made record profits last year. And the company has pledged to raise its minimum wage for U.S. workers to $15 an hour by August. Trying to sweeten the deal, Starbucks CEO Howard Schultz — who’s worth an estimated $3.6 billion — also floated the idea of another pay raise earlier this month that would apply only to workers at non-union locations.

According to labor law experts, excluding union workers from a company-wide pay raise could be unlawful, especially if the idea is conveyed to workers who are involved in an active unionizing campaign.

Matthew Bodie, a former lawyer for the National Labor Relations Board, told the New York Times, “If Starbucks said, ‘Drop the union campaign and you’ll get this wage increase and better benefits,’ that’d clearly be illegal,” Bodie said. “Hard to see how this is that much different in practice.”

While workers feel their current pay rate is insufficient, losing that income is still a major concern. Ebersviller says that the intimidation tactics trickling down from corporate (and from the expensive team of anti-union lawyers Starbucks has retained), has workers worried. “The pay is not enough. It’s also still, like, your livelihood on the line. And so when Starbucks tries to tell people it [unionizing] could shut the store down … it really worries people.”

When their store filed for a union election earlier this month, Ebersviller says, there was over 60% demonstrated support among workers. In order to file, a union needs to gather signed cards or petitions from at least 30% of workers who would be covered by the union contract.

However, unions generally shoot for at least 60% or more, since factors such as staff turnover, new hires and intimidation tactics deployed by employers in the time between filing for representation and the election can cause support for the union to wane.

In recent months, Ebersviller says, Starbucks workers at their store have been told they can’t wear non-Starbucks-issued pins (e.g., pro-union pins). And they’re no longer to post messages — about the union or not — on their store’s community board.

“They [management] claim that these meetings are for helping the store to get better without needing the union in the way, but all that seems to happen is talk of why the union would be bad, and why everything is OK as it is now and nothing needs to change,” Ebersviller says.

Still, it’s all of those little things, taking a hit at the sense of community and unity among workers, that add up. “I still think that we have a lot of support, but I do think that unfortunately, the propaganda campaign has been really effective at making people worried about continuing to support the union,” they add.

U.S. employers spend roughly $340 million each year on “union avoidance” services, to dissuade workers from organizing or squash unionization efforts. Starbucks claims to be “pro-partner,” not “anti-union.” But they’ve candidly told media they don’t support their workers unionizing. And neither does their billionaire CEO, Howard Schultz.

In April, Schultz bemoaned the spread of U.S. unionization efforts. “We can’t ignore what is happening in the country as it relates to companies throughout the country being assaulted, in many ways, by the threat of unionization,” Schultz said during a town hall with Starbucks workers.

In a victory that sent shockwaves through the U.S. labor movement, an Amazon warehouse in Staten Island, New York, became the first Amazon facility in the United States to unionize this year with the independent Amazon Labor Union.

Union membership rate in the service and retail sectors is incredibly low. Yet, workers at companies like REI, Target and Trader Joes have also taken steps to unionize in recent months.

Bruce Nissen, a former labor studies professor and labor organizer, tells Orlando Weekly that if Starbucks is determined to rid itself of the union presence, they could do so by refusing to bargain in good faith with stores that have won their elections, slowing down elections, and by “conducting some kind of subterranean reign of terror” inside the workplaces in an effort to push pro-union workers out and demoralize the workforce that remains.

“That’s standard union-busting tactics,” Nissen says. There are “a thousand ways that they can start dividing you against yourself, and workers against each other.”

As the Guardian has reported, Starbucks has fired more than 20 union leaders across the U.S. in recent months. The National Labor Relations Board has filed multiple complaints, demanding reinstatement and back pay for workers wrongfully terminated.

Still, Starbucks Workers United has had a high success rate in its elections. Of the stores that have voted thus far, roughly 85% have voted in favor of unionization.

“Once I started unionizing, I fell in love with the company but in a whole new way. I’m a lot more partner-focused than company-focused,” Mayson Boykin, a worker at a Starbucks in Jacksonville, told The Tributary after their store voted to unionize. “Starbucks, in our mission and values, right there, it says, ‘partners at our core.’ I’m redefining what that means.”

Workers at the Winter Park store haven’t yet received a date for their election, but they expect to get that soon. Ebersviller says workers at unionized Starbucks locations in other parts of the country have aided their efforts by, for instance, connecting them with a lawyer and providing them with other organizing resources.

“It’s been really, really helpful to have their support,” Ebersviller says. “And we have felt supported throughout this process.”

Across Florida, at least four Starbucks stores have voted to unionize. Workers at an Oviedo Starbucks are currently in the process of voting by mail. The NLRB will be counting votes at that location early next month.

Are you a Starbucks worker in Florida who’s organizing their workplace, or is thinking about it? Email reporter McKenna Schueler at [email protected] (or DM on Twitter for her Signal).