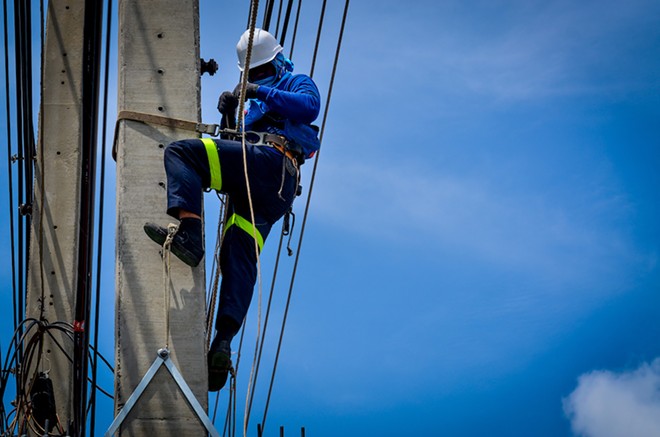 FPL, the largest utility in the state, has nearly 16,000 workers in 24 staging areas, Silagy said in a conference call with reporters. Still, Silagy said there will be “challenges in the days ahead,” with ground saturated from past rain and anticipated storm surges and flooding.

“This is a very slow-moving storm. It is predicted to slow down as it approaches Florida, and then when it makes landfall to continue to be very slow as it moves across the state,” Silagy said. “That means that, again, there’ll be significant amounts of rainfall, storm-surge flooding, and of course, trees being battered by winds for many, many hours in a row, which unfortunately means a lot of them are likely to go over and cause outages.”

Silagy said it could take 24 hours to determine how long restoration efforts will take.

“We have to understand what damage has been done, whether or not it is a restoration or in some cases whether or not we actually have to rebuild part of the system, which, unfortunately because of the strength and the size of the storm, is likely to be the case in some pockets,” Silagy said.

“This will significantly shorten restoration time after the storm,” the company said in a news release. “Tampa Electric has communicated with affected customers to minimize the inconvenience. The affected area is under a mandatory evacuation order.”

Tampa Electric has about 3,000 workers from a dozen states poised to help restore power after the storm passes, the company said. Gov. Ron DeSantis said Tuesday the projected path of the storm cutting across the state means interior counties will “absolutely see power outages,” along with flooding and wind damage.